I live in the fertile but sparsely populated borderland between music theory and history. Though a music theorist in job title, I have found abundant opportunities for cross-pollination between the two fields. My work on Prokofiev’s early adaptations of sonata form relies heavily on paradigms from musicology, taking inventory of specific ways that his idiosyncrasies of thematic process bear the imprint of his aesthetic and sociocultural milieu in early twentieth-century St. Petersburg.

Oddly enough, I migrated to this disciplinary interspace from the adjacent province of literary criticism. As a child, I loved to memorize exquisite turns of phrase that I encountered in poems and novels; I ran through my school’s hallways announcing to my friends that “[t]o make a prairie it takes a clover and one bee” (Emily Dickinson). Studying major literary works later on in high school, I was intrigued to learn that meaning arose not only from a text’s story or graceful combinations of words, per se, but from the fictional procedure itself—from the author’s deployment of particular formal techniques to construct the story in a certain way.

Like many young readers, I operated under the unconscious assumption that proper understanding of these formal techniques would unlock the door to a text’s ultimate meaning. Not until my sophomore year of college did I understand that a text does not possess one true interpretation, like a rare bird locked in a cage. One afternoon in a literary criticism class taught by Daniel Muhlestein at Brigham Young University, an astute fellow student explained that when he read a novel, he tried to view it through several critical lenses simultaneously, including feminism, Marxism, and so forth. While this approach to reading seemed impossibly esoteric to my nineteen-year-old mind, I was nonetheless fascinated at the idea that a text could become a dense, multi-dimensional menagerie of meanings to the trained and searching eye.

It occurred to me later in my college career that a similar critical approach could be productively applied to music. As a piano performance major, I became particularly interested in the early piano concertos and sonatas of Prokofiev. I was often puzzled, however, at the disconnect between my experience of his compositional unorthodoxies and the ease with which many commentators dismissed his works—particularly his formal process—as uninventive or overly reliant on classical models. His sonata forms in particular were often deemed to be mechanical and perfunctory, following “stereotyped formal pattern[s] straight out of the textbook” (Richard Taruskin) or “adhering to ‘sonata form’ as if it were a train schedule” (James McCalla). It seemed to me that such cursory dismissals bypassed much that was experimental and connotatively rich in the composer’s formal strategies, caricaturing them as one-dimensional rehashings of Viennese classical forms.

As I continued my study of Prokofiev in a doctoral program in Music History at Yale, I undertook a more detailed study of the many formal eccentricities in his sonata forms—including the interpolation of unrelated material in the middle of a traditional theme space, the superimposition of two previously sounded themes, the severe truncation of thematic material after the close of the exposition, and the functional repurposing of thematic material following its initial sounding. Often these thematic idiosyncrasies were pronounced enough to disrupt the larger structures in which they appeared, simultaneously inviting multiple interpretations of the overall form. I vividly remember an afternoon spent in a Panera Bread (of all places) on Chapel Street in New Haven, puzzling over the superimposed primary and secondary themes in the slow middle movement of Prokofiev’s Fourth Piano Sonata (1917).

As I struggled to find a formal label for the movement that could accommodate this stratified return of the opening material, it occurred to me that the richness of the movement was actually wrapped up in—not thwarted by—the structural ramifications of this thematic superimposition. The layering of themes placed the movement in dialogue with Type 2 sonata form, Type 3 sonata form, and ternary form simultaneously. There was no single “correct” reading: it was much too beautifully rich and messy to put in any single theoretical box.

After wading more deeply into my dissertation work, I realized that hasty caricatures of Prokofiev’s sonata forms not only ignored much that was interesting in the music itself but also hindered our ability to properly situate the composer historically. I found that Prokofiev did not take his formal cues from a single Viennese “textbook” but was rather in dialogue with a complex network of multiple sonata traditions, particularly the nineteenth-century Russian symphonic tradition, fin-de-siècle Austro-German sonata practice, and the early twentieth-century Franco-Russian avant-garde. In my continued work on early twentieth-century sonata form, I have repeatedly been struck by the deep interrelationship of music theory and history: the more detailed understanding we have of the internal structure of the musical artifact, the more fully and accurately we can piece together the historical traditions with which it is in dialogue.

In the classroom, I have sought to instill in students a similar appreciation for music’s resistance to facile labels, both in terms of internal structure and historical situatedness. Last spring when a spirited debate arose among my students about whether a Mozart minuet could be called a rounded binary form, I suggested that when you attempt to dress a small child in a piece of clothing (a shirt perhaps), and the shirt does not fit, you learn something about both the girth of the child and the limits of the shirt. Though admittedly ridiculous, this metaphor did lead the group to concede that when a piece of music seems to defy existing labels, we can gain a more nuanced understanding of both the complexity of the music itself and of the limitations of our theoretical and historical categories. While I am aware that many of our Conservatory students will go on to pursue careers in other fields, I believe that these kinds of analytical skills will lead them to be more critically thinking members of their professions and broad-minded contributors to society. 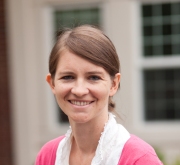 Becky Perry is an Assistant Professor of Music Theory at Lawrence University in Appleton, Wisconsin. She received her Ph.D. in Music History from Yale University in 2017. Her work explores idiosyncrasies of form and thematic process in Prokofiev’s early instrumental music. Her work has appeared in Music Theory & Analysis, and she has presented at annual meetings of the Society for Music Theory, American Musicological Society, European Music Analysis Conference, and Music Theory Midwest.